ONE DAY SOON ON THE ISLE OF LEWIS ... 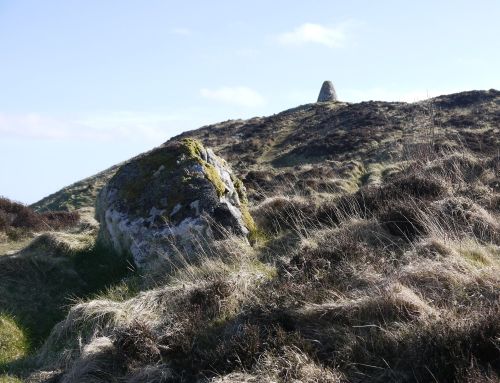 A crofter, patiently whittling a stick on the rocks below the Bonnie Prince Charlie memorial at Arnish Point, sees a small craft drift to shore through the early morning haar. Plying the oars is a hunchbacked woman in a long tartan dress with a large woollen shawl thrown around her head and shoulders. Sitting next to her, not rowing, is an ageing blonde dressed in tight fighting, highly fashionable clothes, her slender neck heavy with jewels.

The tartan clad woman heaves the anchor over the side then drags herself over the gunwale and into the shallows. She staggers onto the shingle clutching a Saltire flag, which she thrusts triumphantly into the sand.

“I claim my Scottish ancestry!” she says, and throws off the shawl to reveal her true identity. It is Donald MacTrump, cannily disguised as Melania’s lady’s maid, Flora MacFloryday; the hunchback is nothing more than a heavily packed golf bag, and he sports a MAGA cap.

“They banned me from flying to Prestwick Airport, but I came anyway!” he cries. “Make … Alba … Great … Again … ” he gasps, before collapsing face-down in the sands.

The crofter approaches him warily. MacTrump struggles to his feet and throws his arms wide.

“Will you flock to my standard, sir?”

The crofter scratches his head and advises him to go home.

“I am home,” MacTrump says. “I am returning to the birthplace of my mother – a fugitive from the FBI, to practise voter fraud and tax evasion. And improve my swing.”

In the boat rocking gently at anchor, Melania hopes the crofter will respect her six thousand dollar shoes and carry her to shore; she looks vainly around her for the promised Lews-a-Lago Hotel.